The profile of yours truly as a finalist among the "12 Best Dallas Music Photographers" went live at the Dallas Observer's DC9 At Night music blog today. I apologize in advance for the verbosity of the text--apparently I dissociated to a freshman-essay-writing version of me. I waxed so prodigiously grandiloquent that they didn't even post 2 of the photos I submitted or two of the answers to their questions.

For posterity, here are the full answers and the unpublished photos I submitted in response to the questionnaire. Excellent put-yourself-to-sleep reading:

1. If you had to guess at the ballpark number, how many concerts would you say you've photographed?

On my website I think I have about 58 galleries of various shows I've shot since about 2009. There are some other shows during that time which, for a variety of reasons, I haven't yet posted. Also I have some old contact sheets from the mid-90's when I was running around with my mentors Chris Howell and Denny Doran.  We were shooting a lot of street photography, but that included shooting plenty of bands, too. I'm pretty sure there's a Melt show in there somewhere, and there are a couple of pix of the Buck Pets back stage at a Nixons show in the Trees parking lot. I also have a few rolls from the mid-80's when I was in high-school, including a shot of Barry Kooda playing with Yeah Yeah Yeah at the Theater Gallery in roughly 1987, which I think is pretty cool because I get to play with Barry now in his eponymous Combo.

With the exception of the Gorehounds shows, I tend to shoot shows in waves, with long periods in between where I'm editing, procrastinating, or working on other stuff.  The number I blindly pull out of the dark guessing-orifice is maybe 80-120 shows.

2. What makes a great concert photo? 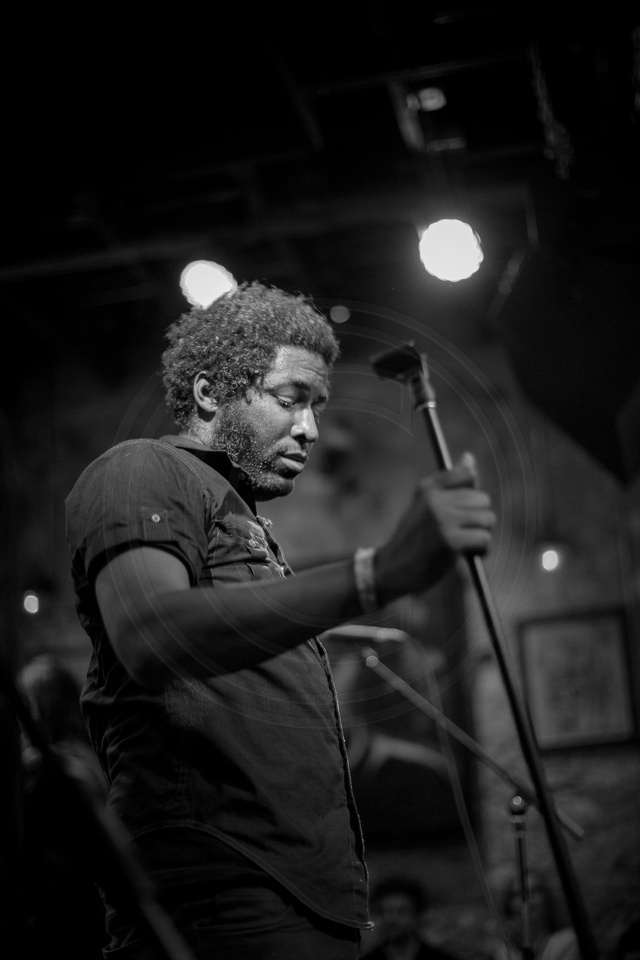 I think there are as many different kinds of

Perspective can help put the viewer in an desirable or unexpected place at the show. It might put them on sta

ge with the band, or right down in the pit, or even backstage so they can see how the rock'n'roll sausage is made. Perspective can help the viewer imagine they're right there at the show, or that they have a privileged, even idealized position that's even better than the one they might've had in the club.  Perspective can also heighten the drama of the shot, like making the performers look 10 feet tall, or alternately getting up close and intimate so it feels like

just a single performer and the viewer.

Similarly, a great photo can capture various aspects of the energy of the moment. A powerful movement by a performer, frozen in time, can express a certain tension and feel like it's almost about o burst out of the frame.  Likewise blurred motion of the audience and/or the performers can really show the kinetic aspect of a show. Compositional tools like using negative space, selective focus, or letting a subject burst through (or fall off) an edge of the frame can also communicate to the viewer that the subject is so energetic it simply can't be contained.

Whether I'm performing in a band or shooting a show, for me the best thing is the collaborative aspect of it, which includes the intimacy of the trust artists share among each other, the trust artists share with the audience, and that the audience reciprocates to the artists.  it's almost completely emotional, and frequently has very little to do with the actual notes being played. My best musical experiences, llke when I perform with my niece Tiger Darrow, are the ones where we trust we're there to support each other in the common goal of playing music that's worth hearing, and we trust that the audience is open and receptive to it. It's not much different when I'm shooting. I need the artists to open up to me, to be vulnerable, and to trust that I'm not there to make them look like idiots so that we can get the most powerful images. I guess that's why I end up being so selective about what I shoot, leaning towards musicians I already know and/or music that I already love. After all, I can't play in every band, so there's shooting is another way to actively participate.

4. What's the strangest thing that has happened to you while photographing live music?

Nothing terribly exotic, scary, or bizarre--at least by my standards--has happened so far, but I'm holding out hope.  Or maybe I should say that nothing unexpectedly strange has happened. It's not unexpectedly strange to find yourself sitting next to a clown in the midst of strapping-on a 3' penis when you're backstage at a fetish event. And yes I took a nice picture of it. 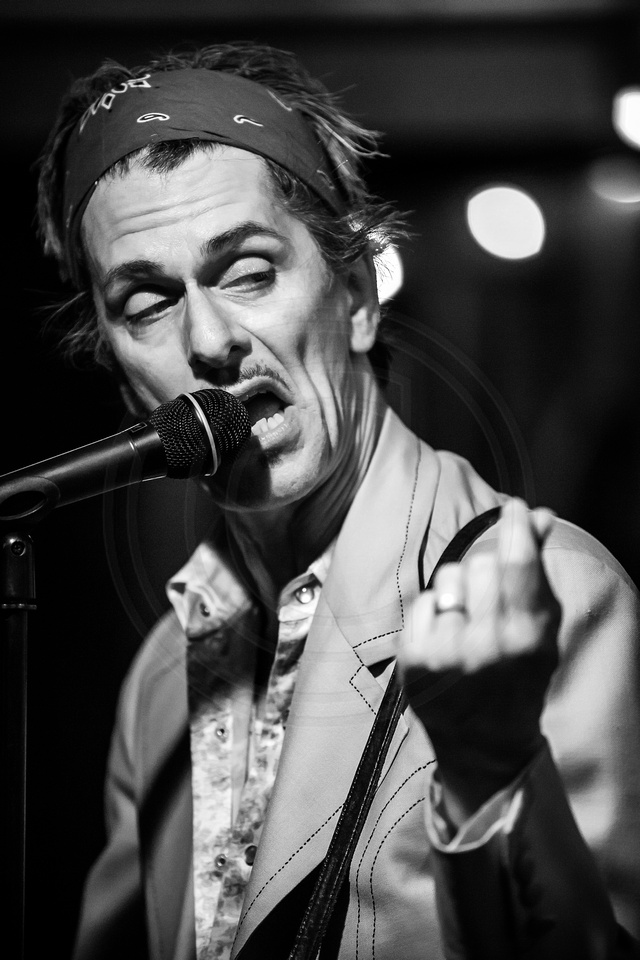 5.What makes a professional photographer as opposed to an amateur?

I'm not sure the distinction between professional and amateur is as binary or important as it used to seem to be. It seems like it's a continuum these days in almost any artistic discipline. For example, I love to shoot music stuff, but I almost never get paid to do it; so far the actual income in my embryonic photographic career has been mainly from architectural and product shots. But I hope to leverage the Gorehounds images into something like a book project, and I will happily sell prints (music-related or otherwise) to anyone and everyone who asks. Maybe in that sense I guess I'm a professional shooter "on spec."

Our digital culture has an ever more voracious appetite for content, so there's always something to shoot, and sometimes people will pay for it. On the other hand, for whatever reason many people are coming to believe that photography isn't worth paying much for. Maybe it's the overwhelming volume of clickable imagery out there, or maybe it's the affordability of high quality gear such that many people think that's all they need to be "good enough"--the fact is, for people on a budget and/or whom don't understand what goes into making a really great photograph, "good enough" really is good enough. Either way the effect is that there is a lot of mediocre photography getting paid for, and a lot of amazing photography that doesn't get paid for.

In other words, I have no idea what makes the difference between a professional and an amateur.

6. Pick one of the photos you've submitted and tell us a little about it: Where was it shot, who is featured and (most importantly) how did you capture it? We'd love to hear logistical description or technical breakdowns or whatever else you feel the voters need to know.

There's a close picture of Labretta Suede, the front-woman of (until recently NYC-based) Kiwi band called Labretta Suede & The Motel Six. I'd missed their Dallas gig at Three Links the previous night, so I made a point of shooting them the following night Lola's in Fort Worth. I'd seen them previously in Dallas, and I had made Labretta's acquaintance during previous visits to NYC, so I knew their shows are always worth catching, and worth capturing.

This a example to me of the joy I can have when I apply all the skills and experience I can muster to the best gear I can get, set up the shot, and then fill myself with love and just hope like hell it will come together something like I expect, or at least it might be a happy surprise.

Shooting in clubs is always tough--even in the best of them the lighting is set up for the audience to experience the show, not for a photographer--so the equipment is always pushed to the edge of it's limits. ISO's are tweaked as high as you dare, but not so high that the image starts to look like a Seurat painting. The aperture is as wide-open as you can get, but of course the razor-thin focal-plane makes it almost impossible for conventional auto-focus to work, especially on a subject that's moving in the dark. Shutter speeds are as slow as you can tolerate--motion blur can be great, but something has to not be blurry--but not so slow that nothing can stay in focus. So I was in a dark room, shooting a gloriously kinetic singer. ISO was at 1250, 85mm lens was at f/1.4, shutter speed at 1/80 of a second. Labretta sweeps by me, probably close enough that I had to back up in order to stay with in the minimum focusing range. I fired about 4 frames, but I didn't look at them. Chimping wasn't going to magically make them good pictures, and that moment wasn't going to happen again.

When I did look at them, there were 4 very similar images with very different focal points. In this image my camera found enough contrast in the light reflecting off of some strands of Labretta's jet-black hair to get a focus-lock. Her lips and just part of her cheek are just peeking into the focal plane. To me, the effect is sexy, energetic and a little abstract. To me, this image represents the perfect combinationof preparation, good equipment, and a heaping serving of dumb luck that can happen in only that combination in only that moment, and that still p

hotography is among the best at capturing.