Galleries 48
Collections 0
Groups 0
Dallas-based Cramps tribute band has been called by those who'd know, including people who toured with The Cramps, as the closest thing available since the death of Lux Interior and the demise of his band with Poison Ivy.

The Gorehounds have provided me the opportunity of the most intensive on-the-job photographic education I could have. My objectives have been simple: shoot what's effectively the same show (in different venues) over and over again and try to keep improving. I've shot all The Gorehounds's shows they've ever played (with the exception of one in Houston in 2011-ish) and will continue to do so as long as I can. We may put a book together. I'd really like to put a book together. 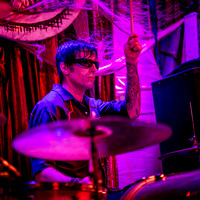 The Gorehounds at Double-Wide

The Gorehounds at Emo's (Austin)

Live Performance and backstage stills from The Gorehounds' shows